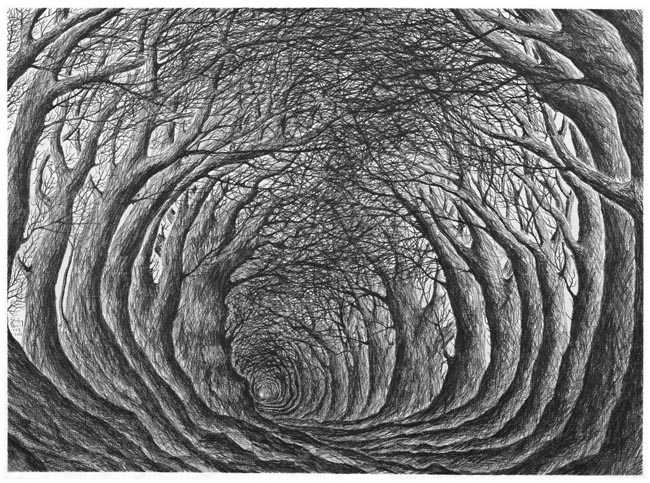 Well, the end is nigh. It’s taken me roughly 703 years, but I’m nearing the conclusion of the Orion trilogy. The next few days should see it wrapped up and handed over to Kathryn (wife/editor/satnav device) for a first read. It’s pretty exhilarating seeing all the threads coming together and I won’t be writing anything else for a while, so I’m savouring every word. The book has taken its toll on my writing shed though. A revolting fungal growth has spread across the walls and I’m sure it’s not from this world. I should just have time to rattle off the epilogue before a three-headed worm consumes my swivel chair. (Does house insurance cover that kind of thing? Or would it be classed as Act of Worm?)

It’s only as I reach the end of my woodland adventure that I’ve discovered a book that could have given me loads of new ways to say leafy. Holloway is an infuriatingly well-written collection, produced by Robert Macfarlane, Stanley Donwood (illustrator) and Dan Richards. It’s a beautiful paean to the sunken paths and hidden greenways of our oldest woods. It’s short enough to read in an hour or two, but every word is a gem. Macfarlane and Richards seem incapable of writing a dull line. If you’re looking to clear your head of Christmas fug, but can’t be arsed to leave your armchair, this is the book for you.

My other top tip for ridding yourself of the morbid mince pie blues would be this perfect little spine-tingle of a pop song, from Unknown Mortal Orchestra.